Wow. WTF? 3 emails in less than a month? Maybe I'm listening to the people who said in the survey "You should send out more emails", or maybe I'm trying to get people who don't care to unsubscribe from the email list because I'm 3 people away from having to pay Mailchimp for the upgraded pay plan. Or maybe I'm just broke and need some traveling money, or perhaps I want all these records that I've been working so hard on to see the light of day. It's actually all of the above.

Some of the things I'm up to this summer when I'm not making too many releases:
1) Mobile Vinyl Recorders will be cutting records at Pitchfork Festival and Afropunk Festival this summer. Pickathon - I won't be working, but my kid and I will be there to hang out and camp. If you are around, email me and let's say hello!
2) Lathe Cut Camp 4 - Is full, but let me know if you are interested in a winter camp.

Preorder Updates:
Sugar Candy Mountain are on their way to me! They should ship very soon!
CD-Records - Should have already shipped.
Forest Fallows - Going out this week!
Grey Waves - Going Out This Week as well!
American Monoxide Web Content - We have approved test pressings, just waiting on the plant. But, check out the final product of the PIAPTK bonus lathe cut below.
Saqqara Mastabas - STILL waiting on the pressing plant. Hopefully soon! 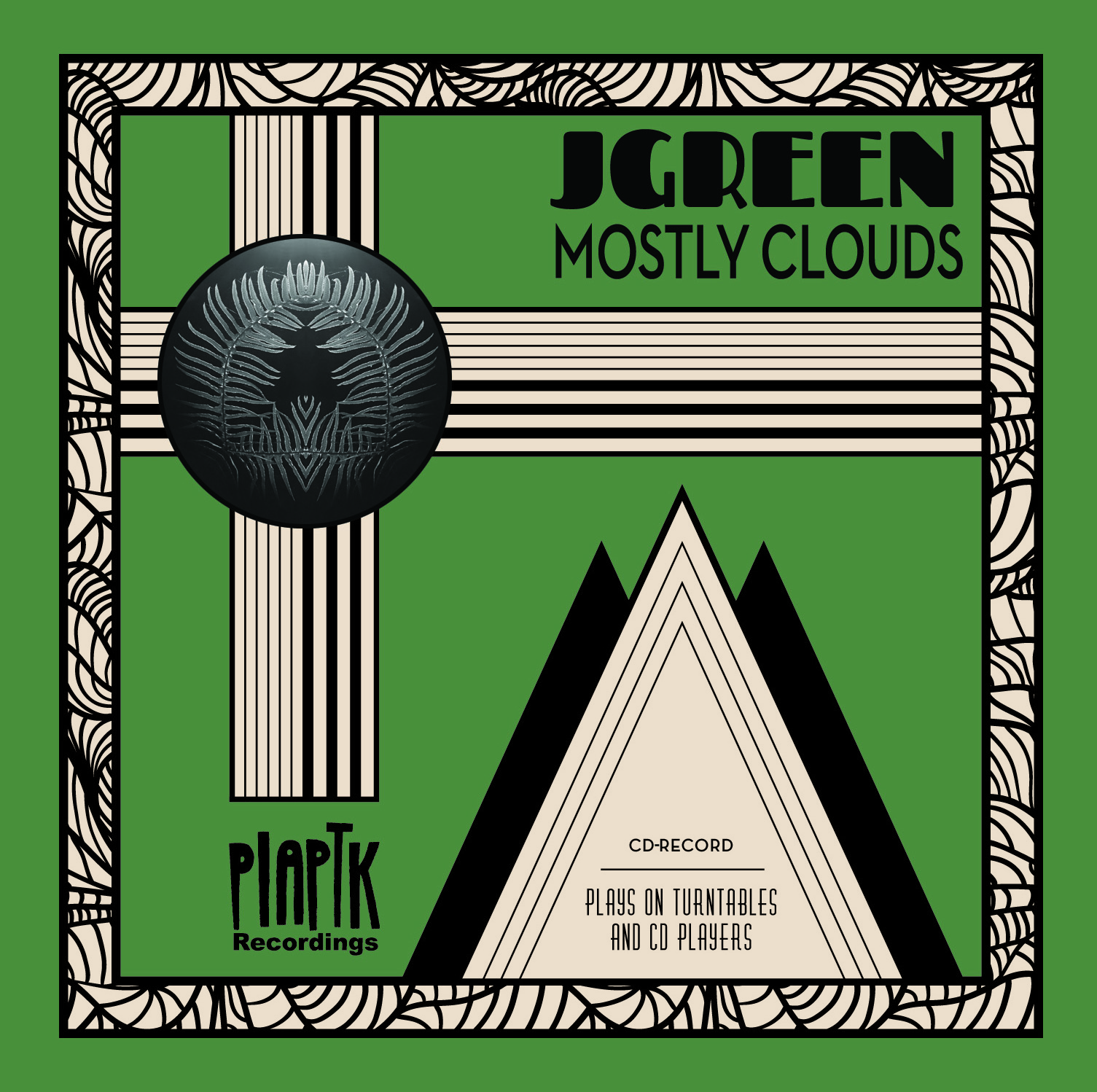 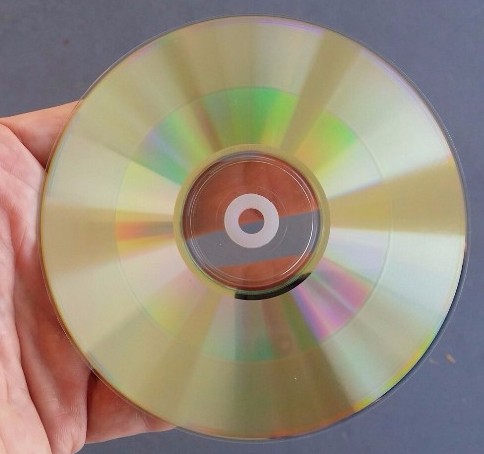 1. New CD-Record Series Disc - Jeremiah Green from Modest Mouse!
Jeremiah Green has been my favorite drummer since the night I heard Lonesome Crowded West in a dorm room in Bruce Hall in 1997 at The University of North Texas. I remember where I was sitting, who I was with, what I was drinking. And I finally got the chance to work with him. In addition to drums, he also makes some beautiful electronica.

Pick it up here! And you can now listen to ALL Cd-Record tracks here! 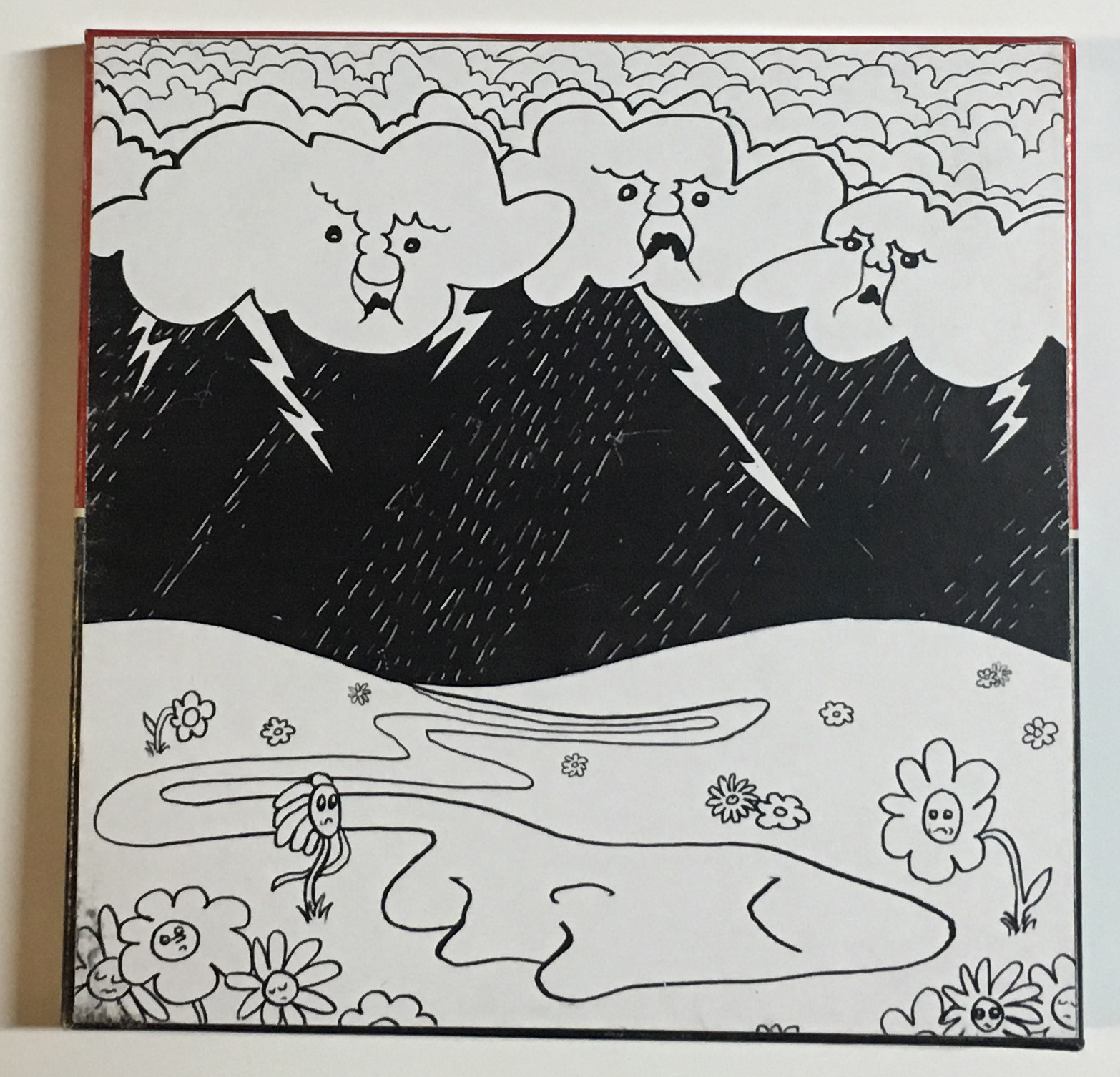 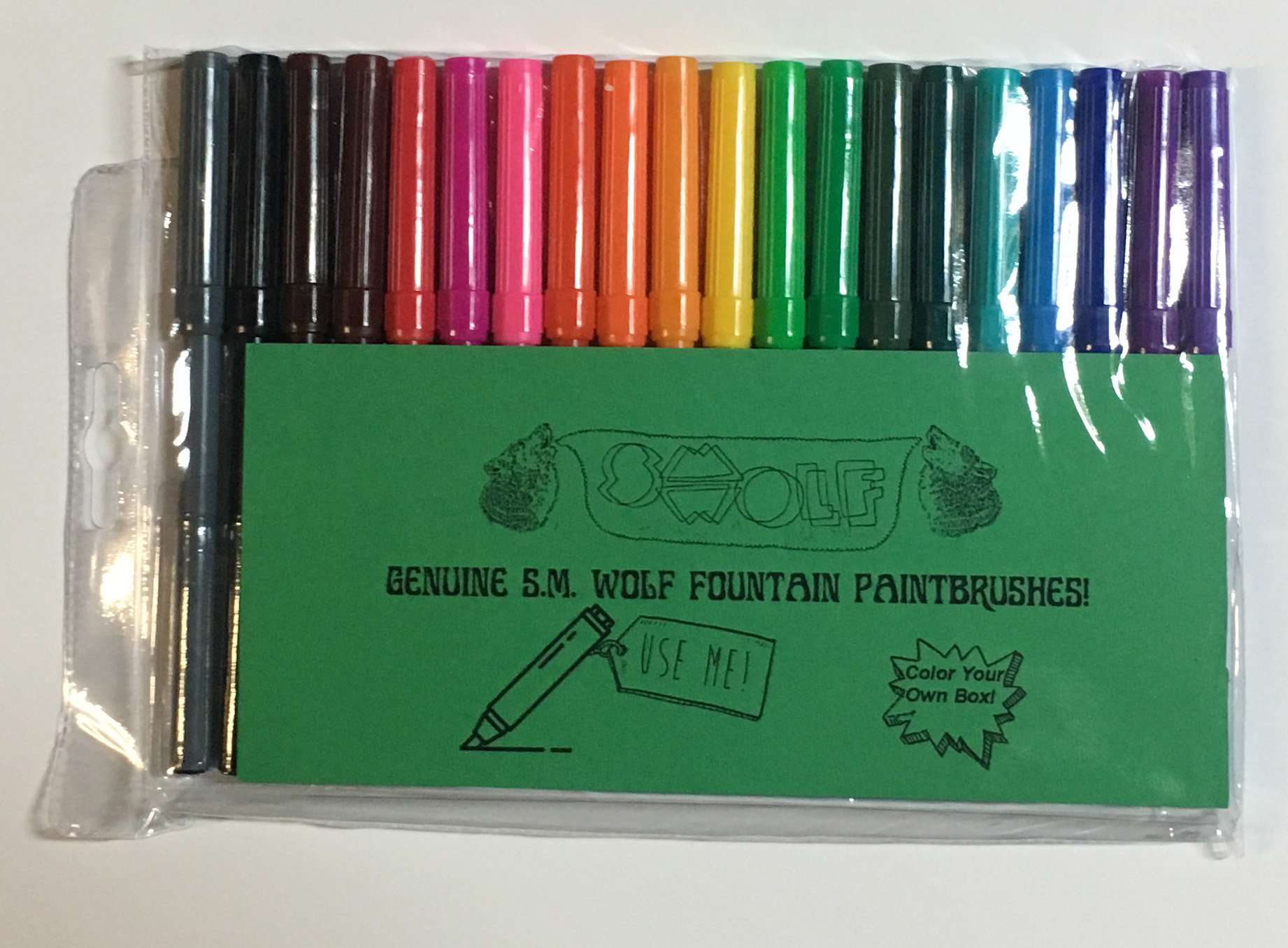 S.M. Wolf is the new(er) project of Amo Joy frontman, Adam Gross. This is the second in a series of Dual-Analog releases with two formats in one package (the first being the American Monoxide/Wight Lhite Magic Mirror Lathe cut/Cassette). It includes a lathe cut 7" screwed onto the front of It. It will play the same song, The Awful Spring, on both your Turntable AND your Reel to Reel deck! It also takes some inspiration from one of PIAPTK's earliest releases, the Golden Boots Bland Canyon 10". Like that release, The Awful Spring arrives to you incomplete and requires purchaser customization before you can complete the set.

All tapes were dubbed in Adam Gross' basement on used 7" reels. Some were blank, and some were prerecorded, with everything from Tito Puente to happy birthday messages to grandma. So, some include non-SM wolf bonus tracks! We hope you enjoy whatever is on there!

The complete package is considered to be:
1) Reel/Lathe combo
2) Insert & "Color Your Own" Box, in it's YOU-COLORED VERSION
3) SM Wolf 20 Fountain Paintbrush set (markers)
4) 4" lathe cut record with "The Awful Spring pt. 2" companion song. (NOT INCLUDED.. see below)

However, the package DOES NOT INCLUDE the 4" in it's initial mailing. In order to receive it, you must color your box with the SM WOLF Fountain Paintbrush set and post a photo and tag PIAPTK and SM Wolf on some form of social media and then we will send it to you, or, you can pick it up from the band in Indianapolis (you must still tag us both). WE REALLY WANT YOU TO COLOR THIS BOX.

Step One: Color Box & Take Photo
Step Two: Post photo on Social Media and tag SM WOLF and PIAPTK
Step Three: Send a link or a screenshot via email to: peopleinapositiontoknowshop@yahoo.com AND fulfillingsounds@gmail.com.

Why do we make you jump through hoops? Because we love you and want you to interact with us. We want your box to be one of a kind. We want you to value this record because it was a collaboration between you, the label, and the band. It makes it more valuable and fun for everyone.

3. Haboob - ST - Golden Boots' Side Project Jazz Odyssey!
Haboob are a freaky weird Instrumental Jazz/Prog/Funk/Psych band and can be loosely described as a Golden Boots side project, as many of the main players are also in Golden Boots. Led by Jeff Grubic (who frequently plays sax and keys with Golden Boots), Haboob is usually made up of 3 or 4 of the following dudes, who are all Golden Boots: Ryen Eggleston, Andrew Collberg, Ben Schndeider, and Dimitri Manos. Along with organist Nick Letson (who is my roommate and also played on the upcoming Golden Boots LP). Free form Jazz explorations in front of festival sized crowds... and retirement homes, wealthy dinner party attendees and noise show-goers.

Only 100 copies! on Red with Blue flame vinyl! In hand-silkscreened covers! Hand numbered!

Check it out here: https://soundcloud.com/piaptkshop/sets/haboob-st

4. American Monoxide - Web Content PIAPTK Lathe bonus
As with most projects, I know where I plan to take them, but I never really know where they are going to end up until they are there. This is one of those times. I really love this concept, which came together one piece at a time, and almost wish I had used it for a standalone release, and not just an add-on, but here it is.

Each of these discs was hand cut/peeled by me, and hand dip-painted by my daughter. Each disc has a psychedelic letter that, when combined, spell out the band, title (Robot Walk), and label. Then I scanned them in, combined, and printed them out on 7" sleeves.

Check out a couple tunes from the album here: https://soundcloud.com/americanmonoxide-38622606


There are still a few PIAPTK versions available for PREORDER HERE.

Also, a second plea... for the love of all that's holy, PLEASE check out Almost Halloween Time Records. They are co-releasing this record and are UNBELIEVABLE. If you appreciate vinyl record packaging as art, there is NO WAY you won't love them!!!! 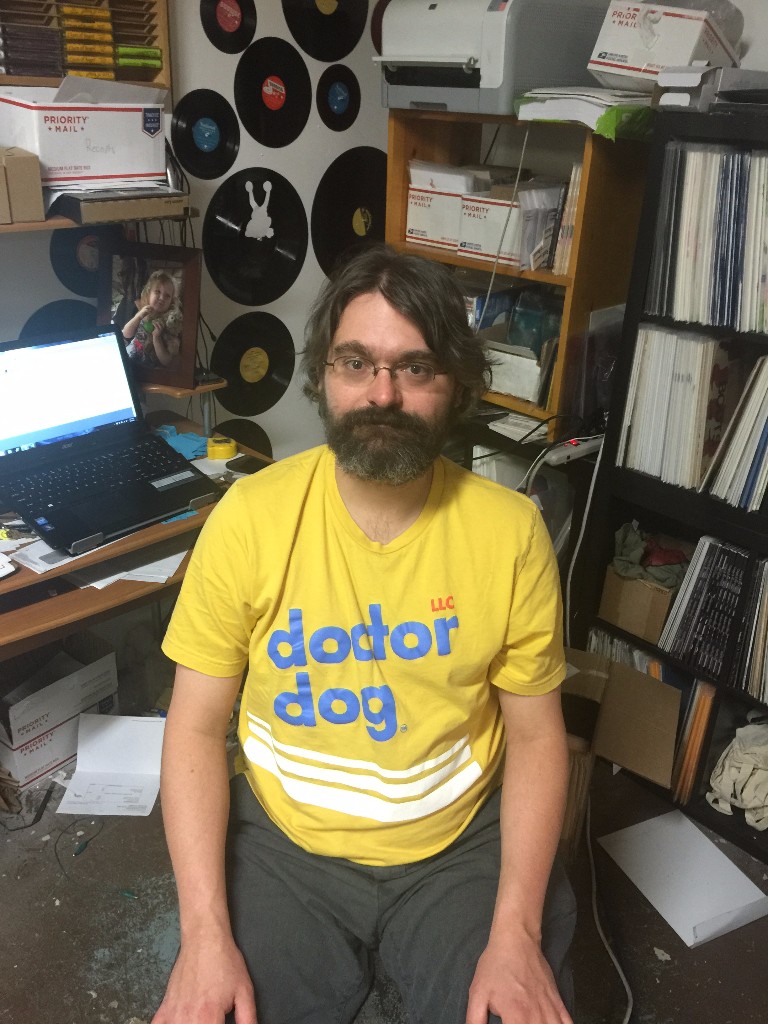 5. Meet Seth of Fulfilling Sounds!
Anybody that has followed PIAPTK and paid any attention or cares at all, knows that I have a million irons in the fire always. I'm also out of town over half the days out of the year, so I can't package all of the orders like I did in the old days. Luckily, my buddy Seth, who owns Baby Gas Mask Records, started a fulfullment company and does the mailing for us and dozens of other bands and labels. He rules. If your orders are delayed, it's not because of him, it's because of a pressing plant, most likely. But, if you ever have problems with an order, I will probably answer the email, but he will be the man making it right. Check out Baby Gas Mask and Fulfilling sounds and give them a "Like" on FB!