Well, things are still looking wacky and unpredictable over here in Tucson. How are you?

We may be having to move out of the studio I've had since I moved to Tucson (over 8 years ago), which means 2500 sq ft stacked to the rafters with record lathes, PIAPTK backstock, garage sale finds, arts supplies, thrift store art, my LP collection, etc are gonna have to go somewhere. And I have no idea where the hell that is going to be, so, hopefully you can help me relocate micro-doses of goodness to your place. And to help you do that, I've dragged some extra stuff out of boxes and onto the archives pages of the site. And we are having another overstock sale with NOS old releases for as cheap as $1.

There is also some weird stuff on the horizon that may require me moving out of Tucson (WAYYY out of Tucson) to follow my kid, so any help you can do to lighten my load will be greatly appreciated!

Also, I'm driving from Tucson to Seattle starting Friday, so if you live on the west coast and have been considering buying a record lathe, now is your time to get it delivered and get trained on it! But hmu soon af.

Ok, onto a few things. 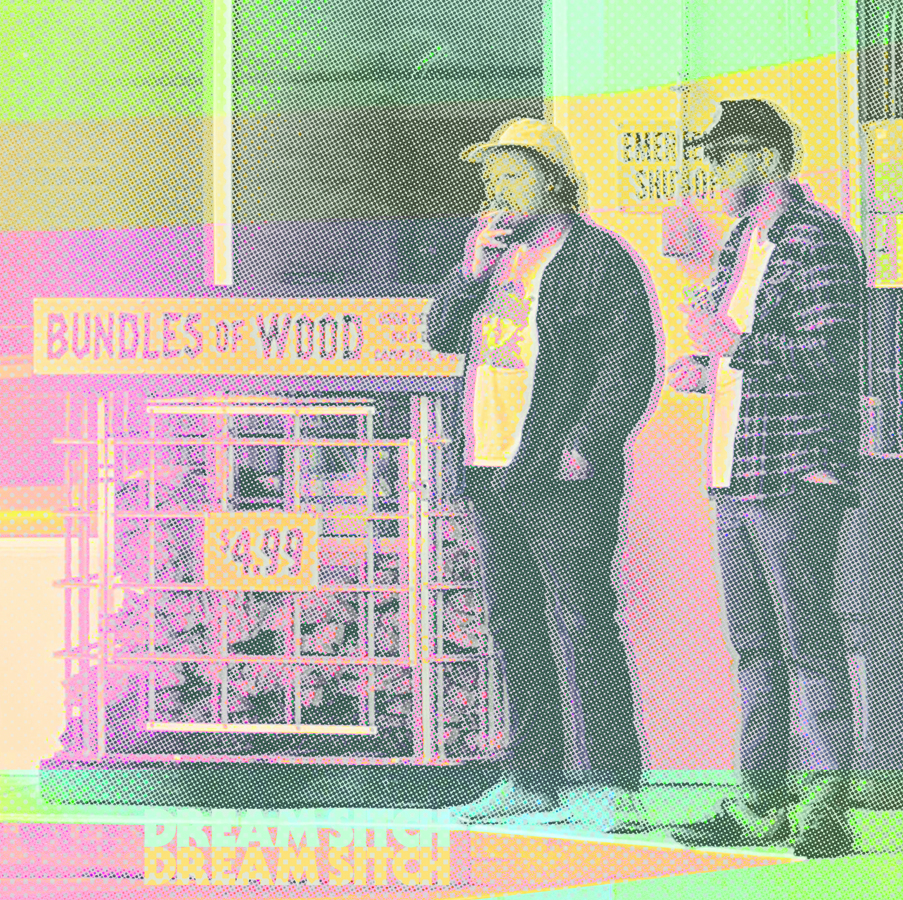 The Michael Nau + Floating Action Long Distance Quarantine Project, Dream Sitch, released their first single "From Now On" on Spotify and you can Stream it HERE! The Lps are set to be released in December, and there will probably be a preorder in Mid-November. More to come on this one. 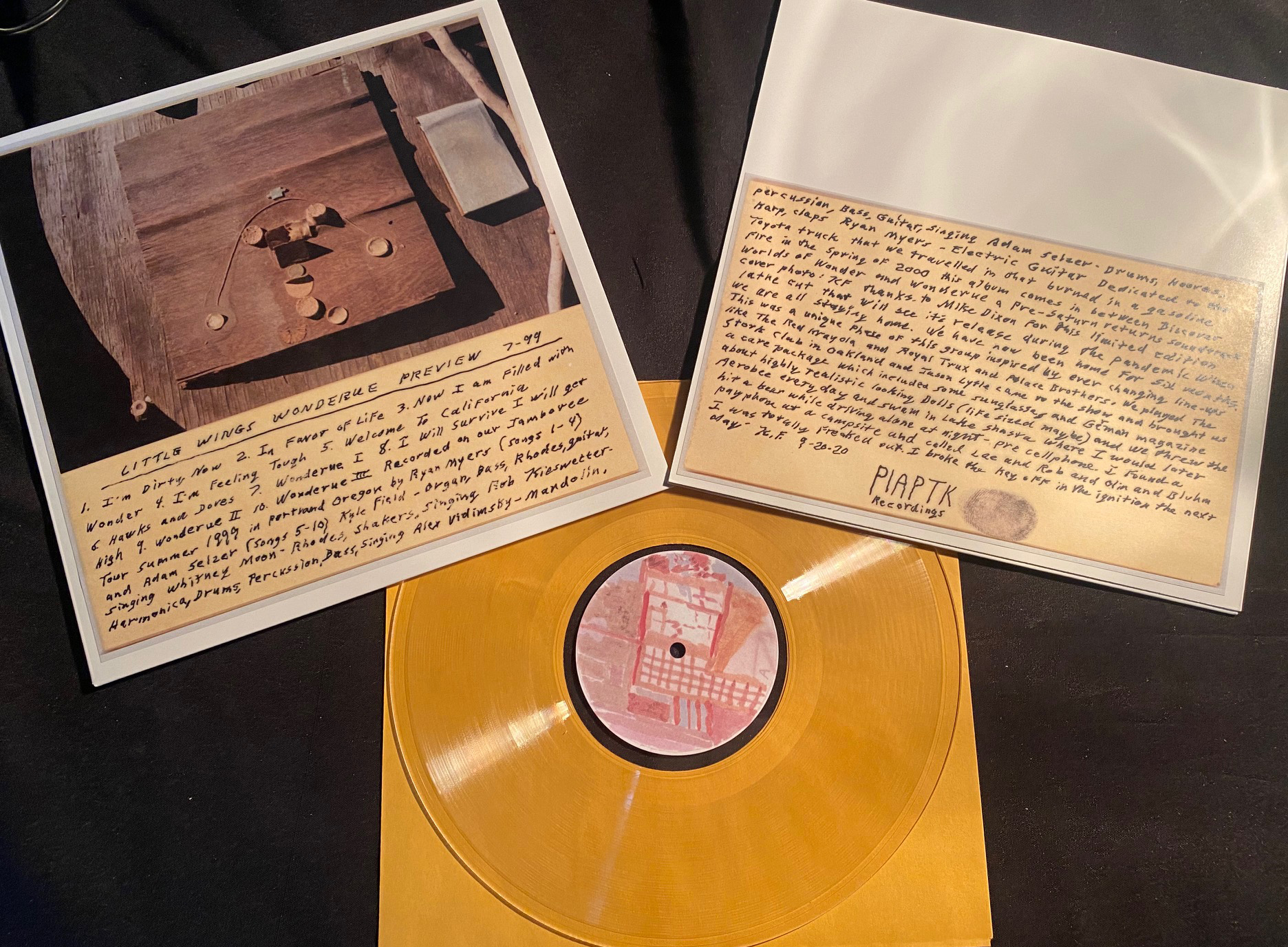 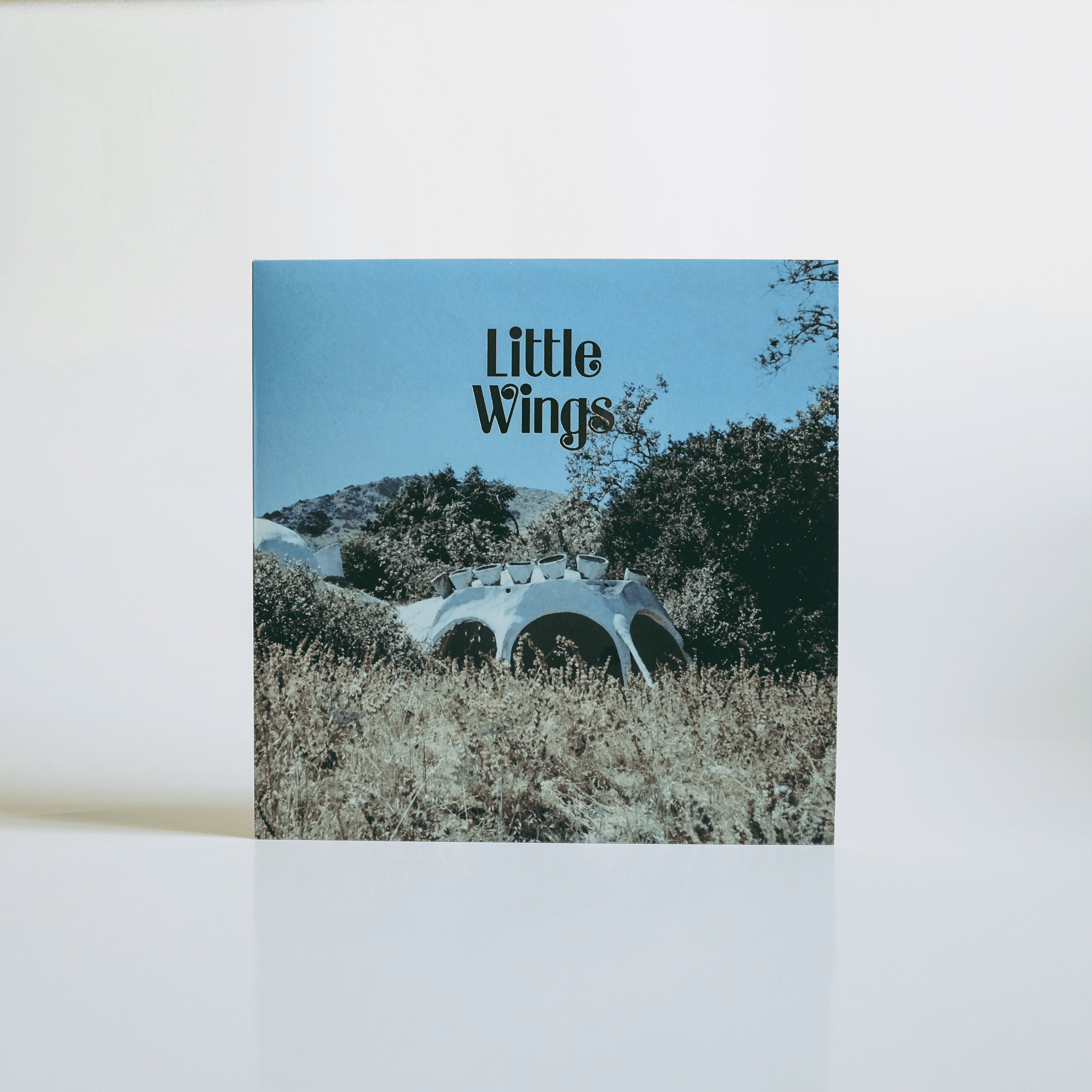 My love for Little Wings is no secret... I talk about it on the first line of almost every new release I release for him/them. Wonderue is ONE OF THOSE RECORDS. My second favorite LW record and part of the Wonder Trilogy. Faith Children, Shredder Sequel, I saw Reflections, etc. This album is awesome, and is currently not available on Spotify. The LP has been reissued by our buds at Moone Records in Phoenix and we traded with them to get some distro copies. Stream Wonderue here: https://uproxx.com/indie/little-wings-wonderue-rei...

But the real PIAPTK news is Wonderue Preview. A weird cassette tape that Kyle put out in 1999 just before Wonderue was released initially. The songs on Preview are not directly related to Wonderue, but with LW, everything has ties to whatever else is in his canon. If you don't already know what I mean, you should dig deep and be richly rewarded.

I've had a crappy internet bootleg copy of Wonderue Preview for years and always loved it. (I initially got turned on to Wonderue Preview by Graves, who did a cover of I'm Feeling Tough, and I asked Greg " I have every Little Wings album, how do I not know this song?!?!")

So, when I saw Moone beat me to reissuing Wonderue (A few years ago, Kyle and I talked about releasing the whole Wonder Trilogy (Wonderue, Discover Worlds of Wonder, and The Wonder City as a boxset, but that was too expensive, and I think I was probably quitting the label for the 58th time around then, so it never materialized), I reached out about reissuing a Lathe Cut of Wonderue Preview. I was hoping that Kyle had the masters, but of course he didn't (he is not the best archivist of his own output), and the copy I had would have sounded like total garbage and would have been even worse on a lathe cut. So I called all my LW collector nerd buddies and found that Chad Heile had an original cassette. His roommate, Bryan Wollen agreed to digitize it for us and did a great job. Unfortunately the tape probably didn't sound super great to begin with, so even the well transferred transfer was hissy and lo-fi. So, we hired Richard Houghten to master it and he slayed it. The master sounds SOOOO Much better than the original. Unfortunately, cutting to a lathe cut is a LOT different than just audio mastering, so myself and Chris Levesque spent a lot more time getting it to sound right on a lathe cut. And considering the consequences of this records birth, I am extremely proud of what we all accomplished. I think it sounds great (with the asterisk of what it is) and totally appropriate for the material.

I hope you enjoy it.

Pick One Up Here 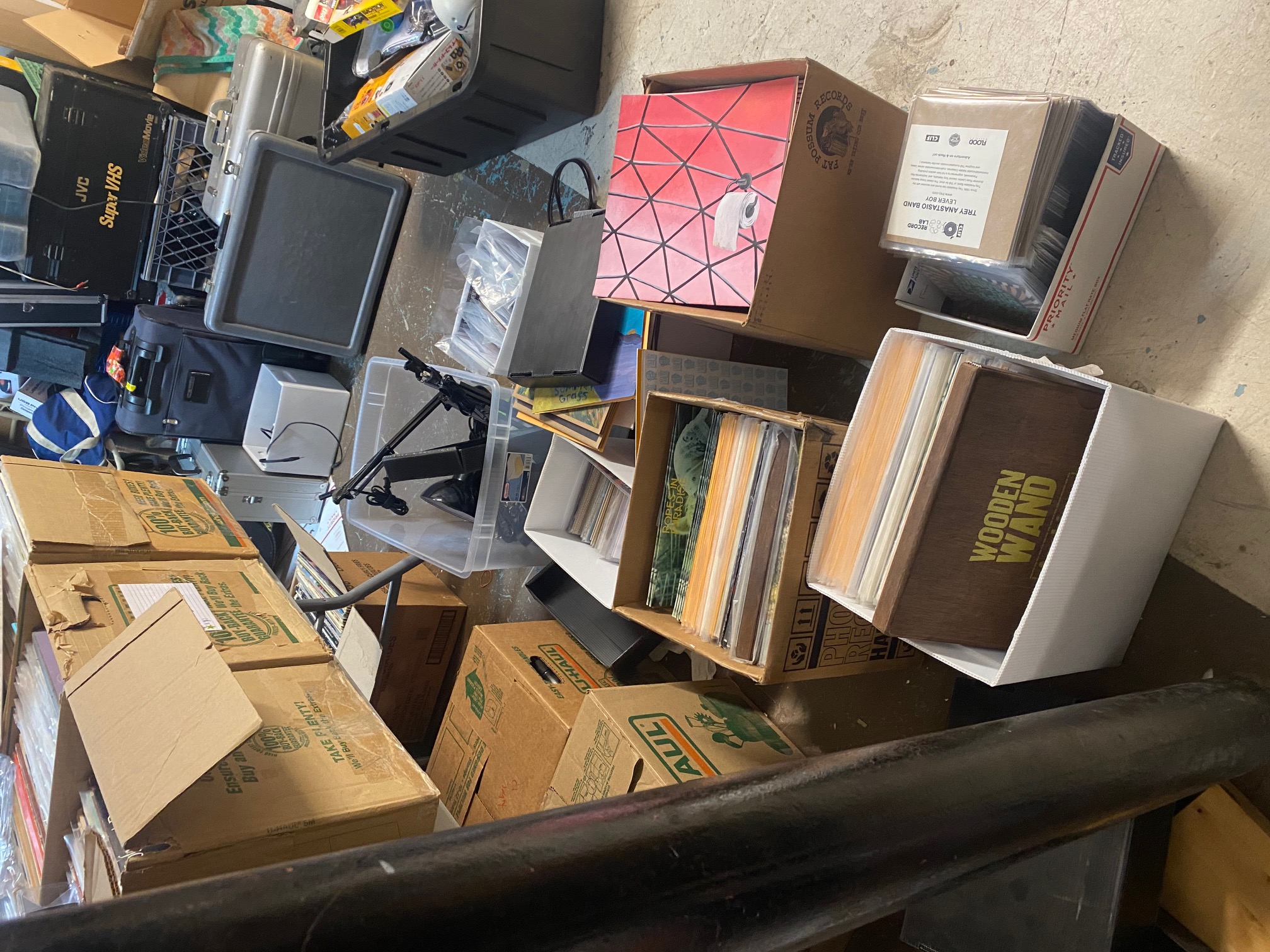 You know how it goes. I do this every year or so. I clean up the studio, I find a box of this and that, I get less attached to my standard 3-5 archives copies that are held back, etc. Well, Oops I did it again, I dug through the box, and brought up new good stuff that you're gonna love... doo doo be doo doo. Found a lot of great long out of print stuff, Scottman, Devendra, Tunde Adimbe, Floating Action, Michael Nau, Jason Lytle, Grandaddy, etc etc.

Check Them Up Here 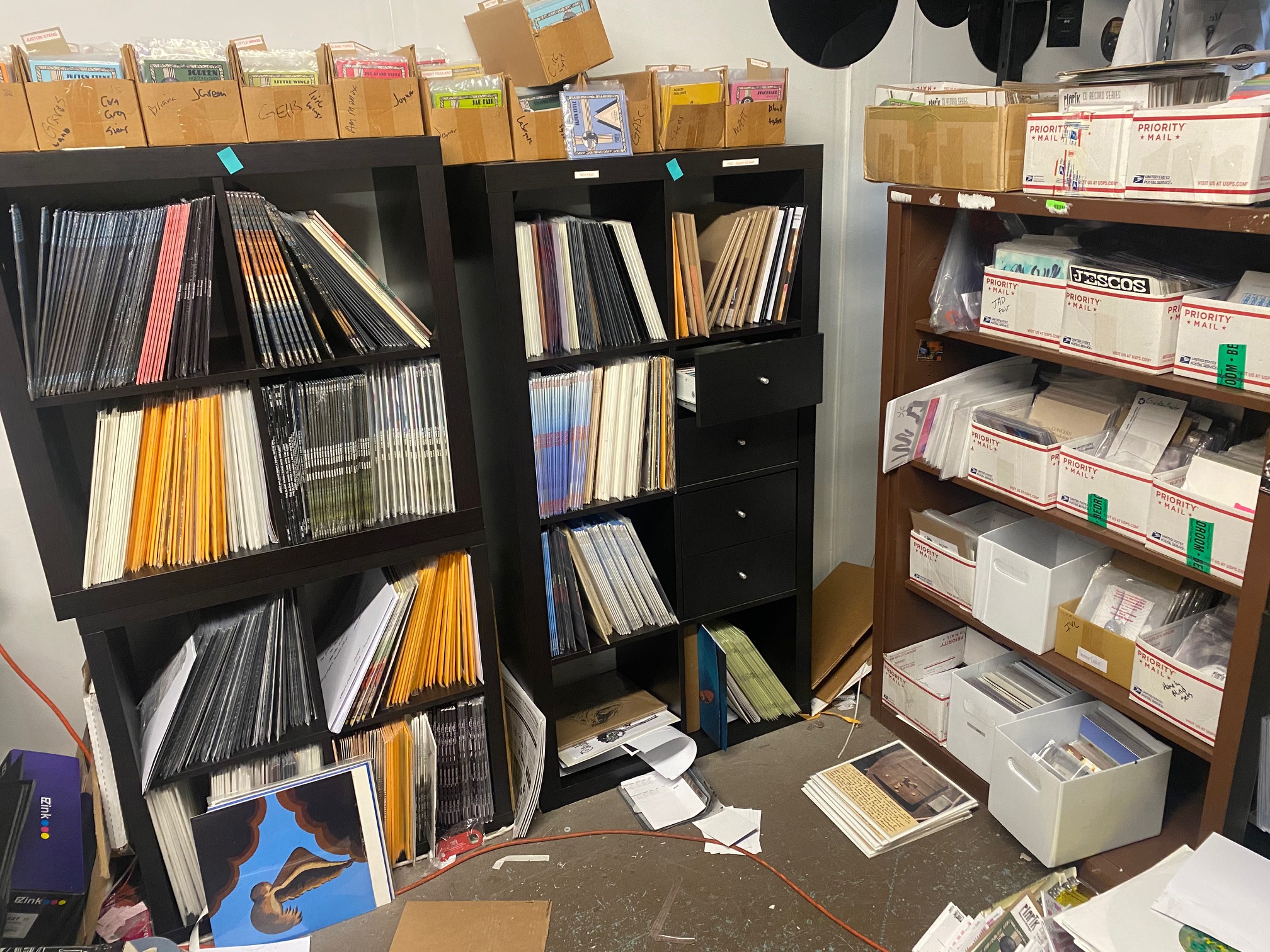 You also know how this one goes, because I do it every year or so as well. I release a bad ass record, nobody checks it out, nobody buys it, and hundreds of copies sit on my shelf feeling unappreciated, and then I mark em down way below cost in the hopes that one of you fine folks takes a chance and throws down a couple bucks to bring it into your home and love it. ::Cue the Sarah McLachlan Soundtrack::

Help, you, me, the artist, and the collective human consciousness out by taking a chance on something you don't have.

Pick Them Up Here